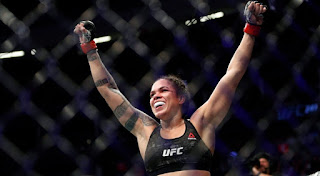 IT’S TIME! Dual weight UFC champion Amanda Nunes is ready to defend her featherweight title for the first time against Canadian contender Felicia Spencer. Can ‘Feenom’ pull off the upset to dethrone Nunes? Let’s find out…

Round 1: Amanda Nunes is flicking out kicks to start the fight. Felicia Spencer is backing up to the cage moving side to side to try and escape the champs pressure. Spencer steamrolls in for the takedown but is shrugged off and eats a big shot that appears to have cut her around the eye. Nunes starts to open up with her striking and is landing big punches without putting any combos together – credit to Spencer her chin holds up. The Canadian shoots in for another takedown but Nunes turns the tables and throws the challenger to the mat. She goes to work on top working to improve her position. Nunes momentarily takes the back and looks for a choke before settling to side a place in the half guard and begin unleashes nasty elbows. Spencer is cut now and the blood is flowing. Undeterred though ‘Feenom’ is trying to set up a submission but Nunes is wise to it as the round ends. A big first round for the champion.

Round 2: Nunes goes back to throwing heavy hands at the start of round two. Spencer jumps in and is made to pay with an overhand right. Nunes fires off a low kick. Spencer tries to return but doesn’t seem to have anything on the feet for ‘The Lioness’. Nunes cracks Spencer with a huge overhand. Not long after she lands another. Spencer shoots for a takedown but is again reversed and ends up on the bottom eating shots. Fortunately she doesn’t take too much damage and pops back up. Every time Spencer tries to throw anything offensive she eats heavy shots. Nunes is getting confident now and attempts a spinning back fist. Spencer lands a nice high kick but Nunes isn’t bothered and unleashes another overhand just before the round ends.

Round 3: At the beginning of round three Nunes barges forward but Spencer lands a nice knee in the clinch. Nunes remains unfazed and starts to throw heavy shots that are clearly bothering the Canadian who has proved tough if nothing else so far. Nunes cracks Spencer hard and moves in for the finish but Herb Dean steps in to allow Spencer to pick up her mouthpiece. Nunes goes back to work landing more punches. The pair tie up and the champion just rag dolls Spencer to the floor before allowing her up. Several heavy shots land and it’s starting to look like a mismatch. All credit to Spencer for taking all that is coming her way – she eats a nasty uppercut. The low kicks are adding up for Nunes and Spencer is clearly struggling to stand up. Nunes continues to fire big shots up until the bell sounds.

Round 4: Both fighters exchange leg kicks at the start of round four. Nunes lands a big punch that knocks the head of Spencer back. Nunes dips down gets a takedown and then just lets the Canadian stand-up – she really is just doing what she wants right now. More leg kicks. More punches and a lead elbow – Nunes is so dominant in this fight. Again, Nunes dips down gets the easy takedown, and then stands over her opponent hitting leg kicks before allowing her back up. Spencer to her credit is pushing forward and trying hard but she looks levels below Nunes who is making her pay every time she steps into range. A nasty leg kick followed by a one-two backs Spencer up to the cage. Another right hand, followed by a beautiful combo. Spencer is trying to get out of the way but Nunes is hunting her down and lands more big shots. The fight goes to the floor the champ is landing ground and pound and then jumps on the back and locks up a choke but Spencer is saved by the bell. Spencer has a huge hematoma on her forehead as she heads back to her corner.

Round 5: The final rounds picks up exactly where the last one left off – more punishment being dished out by Nunes. The fight goes to the mat and she is working in side control. Spencer is doing well to shut down the attacks of Nunes and is at least taking less damage in round five. The damage is already done though she is literally drenched in blood and is still eating elbows. Nunes stands back up but doesn’t let Spencer get up – she’s lands some leg kicks to her downed opponent before she eventually stands up. As she doesn’t Herb Dean steps in and calls time so the doctor can check the cut on the Canadian. The doctor says she’s good to go and the fighter wants to fight on. Nunes backs her opponent up to the cage lands more big punches before dragging the fight to the floor where she is landing ground and pound as the fight ends.

FOR MORE INFO HERE
Posted by Danialrose at 11:34 PM

Email ThisBlogThis!Share to TwitterShare to FacebookShare to Pinterest
Labels: Sportsnews