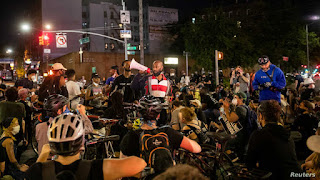 New York officials have lifted a curfew imposed to quell protests over the killing of George Floyd a day early Sunday.

“We are lifting the curfew, effective immediately. Yesterday and last night we saw the very best of our city,” New York City mayor Bill de Blasio wrote on Twitter Sunday.

New York City: We are lifting the curfew, effective immediately. Yesterday and last night we saw the very best of our city.

The 8pm curfew – the first in New York City in decades – had been imposed as clashes between protests against police brutality and cops became violent. But Saturday night, police stood down, allowing peaceful protests to continue after 8pm.

The curfew was initially set to remain in place through at least Sunday.

De Blasio’s tweet was met with dozens of responses calling on him to “resign” as protesters feel his office has not done enough to protect them or to clarify who incited violence at their demonstrations.

Protests began across the United States last week following the death of Minneapolis African American man George Floyd, who was pronounced dead at a hospital after a police officer kneeled on his neck.

Email ThisBlogThis!Share to TwitterShare to FacebookShare to Pinterest
Labels: News