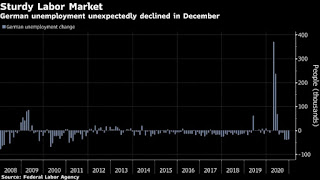 German joblessness unexpectedly declined in December, though companies were heavily dependent on government subsidies to keep workers employed through the latest lockdowns.

A decrease of 37,000 left the total number of unemployed people at 2.776 million and the rate unchanged at 6.1%, according to the Federal Labor Agency. Economists surveyed by Bloomberg had expected a gain of 10,000.

At the same time, applications for state wage support increased, according to labor agency chief Detlef Scheele. Some 2 million workers benefited from the government’s furlough program in November, according to the latest estimates by the Ifo Institute -- a number that is likely to rise.

The country has been in a hard lockdown since the middle of last month, with most retail stores, restaurants, bars, gyms and cultural venues shut to limit the spread of the coronavirus. Chancellor Angela Merkel is likely to announce an extension of the curbs beyond the current Jan. 10 deadline at a news conference later on Tuesday. 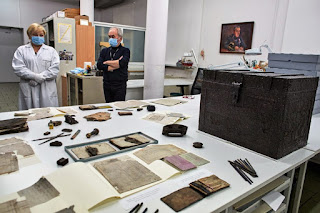 Contents of police chest buried for 75 years after German invasion of Poland restored.
The contents of a police chest buried during the German invasion of Poland in September 1939, and recently rediscovered by a farmer, have been painstakingly restored.
The collection is “unique” in Poland, says the director of the Łódź State Archives, Piotr Zawilski, quoted by Gazeta Wyborcza, “because of what happened to it at the beginning of Second World War and the wartime fate of the people who transported it”.
The chest was used during the evacuation of the Horse Reserve Headquarters of the State Police in the city of  Łódź. Hundreds of documents, as well as wallets and other personal effects, were loaded into the chest for transportation. The documents were dated up to 1 September 1939 – the date of the German invasion that began World War Two. 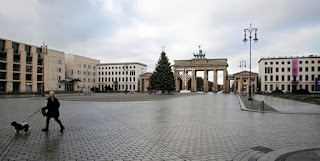 Experts: Germany to Face Wave of Bankruptcies, Soaring Unemployment with Berlin Poised to Extend COVID-19 Lockdown
With COVID-19 infection rates still running high, German authorities are likely to extend the current national lockdown beyond January 10. Berlin introduced nationwide social restrictions before Christmas, which included the closure of restaurants and most shops.
If the measures remain in force, the country will face a wave of bankruptcies, as well as mounting unemployment, according to experts quoted by Die Welt newspaper.
"If enterprises go bankrupt, then short-term payoffs to workers won't help with unemployment [which is] expected to rise," President of the German Institute for Economic Research (DIW Berlin) Marcel Fratzscher said in an interview.
IF YOU WANT TO READ MORE CLICK HERE

Posted by Danialrose at 3:06 AM